I believe the notion of God, the Father, derives from yet another line of interpretation from that past asteroid impact, eruption spectacle. Below are two photos showing mushroom clouds from early US nuclear bomb tests. I believe it is quite clear and apparent that the smoky columns and ‘knobbed’ mushroom cloud canopies in the photos can be construed and described as ‘phallus-like’. And because such imagery erupted up into the sky it could be construed as a phallus ‘erecting into the sky’. This then is an exactly similar sight I believe the ancients witnessed and so while some interpreted a ‘Tree of Life’ from the sight others came to a phallus conclusion regarding that past asteroid impact, mushroom cloud eruption spectacle. 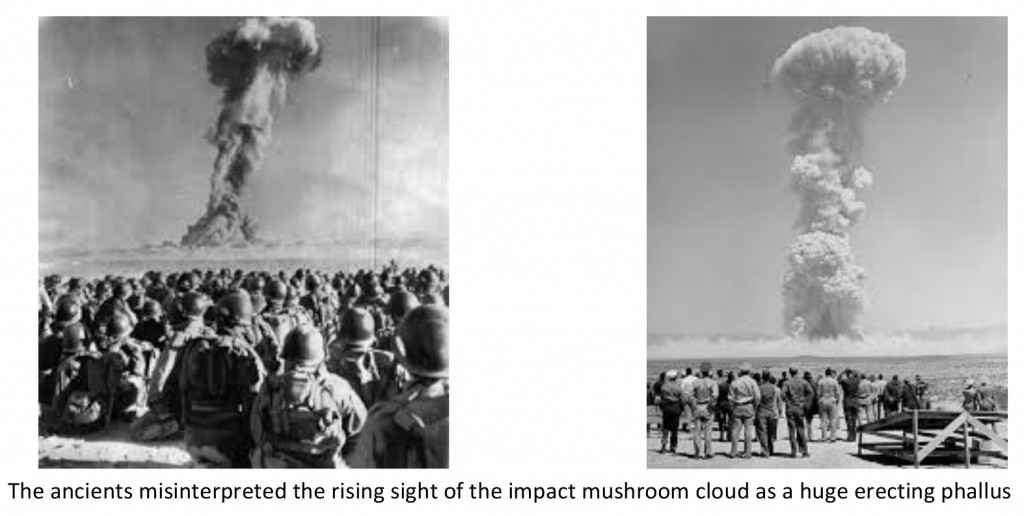 Having placed a phallus interpretation upon the erupting mushroom cloud from the asteroid impact when the huge torrent of uplifted sea water from the impact and impact caused rain storms fell upon the surrounding lands it was imagined by the ancients as being heavenly ‘semen’ from the phallus shaped mushroom cloud they had sighted.

The Sumerian word for water was the same word for semen. An alignment of meaning I believe that stemmed from these exact impact circumstances. That the water fallout from the asteroid impact was mis-imagined as semen by the Sumerians. We are told in Sumerian myth that Enki, as outlined being the creator Sumerian god of water, ‘impregnated goddesses and the land with his water or semen’, that ‘he filled the ditches of the land with his semen’. Description which till now has being a curious, mystifying scenario to investigating mythologists. Such description is evidently talking of a metaphysical concept and not real flesh and blood accounts of literal human semen and makes contextual sense I believe when we apply an impact senario to such myth.

John Allegro was a prominent British linguist of early Mesopotamian languages who was chosen to be on the international team of linguists to decipher the Dead Sea scrolls in 1953. He later went on to write ‘The Sacred Mushroom and the Cross’ a book which detailed how that metaphysical ideal of semen-water fertility played an underlying part of early religion right across the Mesopotamian region and that its concept started in Sumerian creation myth. He writes that the likes of the name etymology of Zeus and Jehovah both derive back to Sumerian origin having the meaning of ‘Juice of fecundity, spermatozoa, seed of life’. That the name of Sumerian storm god Iskur has a meaning of ‘mighty phallus’. That the most forceful spurting of his seed of life was accompanied by storm and shrieking wind. This description makes contextual sense as it derives I believe from both the impact produced blast wave and the extreme stormy weather conditions created by the asteroid impact that would have been concurrent with the fallout of water from the skies , viewed as heavenly ‘semen’ by the Sumerians ejaculating from their mighty phallus storm god Iskur. Because of the immense impact significance behind this particular phallus aligned association it was enshrined as a religious absolute by the ancients and as time passed the one-off ’semen imagined fallout’ from the impact event was later transposed, over-layed onto the cycle of nature and applied to the yearly fertile invigoration of the land. That each rainy season it was imagined as heavenly sperm from the phallus Father god fertilising the soil, seeds, and plants. As each rainy season drew near or especially when drought conditions threatened the ancients would invoke their god to send his heavenly ‘sperm’ (rain) upon the land just as had happened at the time of the asteroid impact.

As outlined the ancients mis-imagined a woman form from the initial stages of the eruption spectacle. But as you can image that woman form was only one part, a freeze-frame snapshot of the wider sequence of the unfolding eruption sight. As the initial dome shaped Wilson cloud dissolved from sight, and with it the wide hipped looking woman form, the erupting blast cloud column rose further up into the sky taking on its ‘knobbed’ mushroom cloud canopy appearance and was at that point visually imagined as a mighty phallus erecting into the heavens by the astonished ancients. When the ancients had time to regather their senses they came to the notion that they had witnessed a type of heavenly copulation had taken place in the sequence of that eruption spectacle. That the erecting phallus like mushroom cloud sighted at the end of the eruption sequence had sexually penetrated the imagined woman form sighted earlier in the initial eruption sequence. 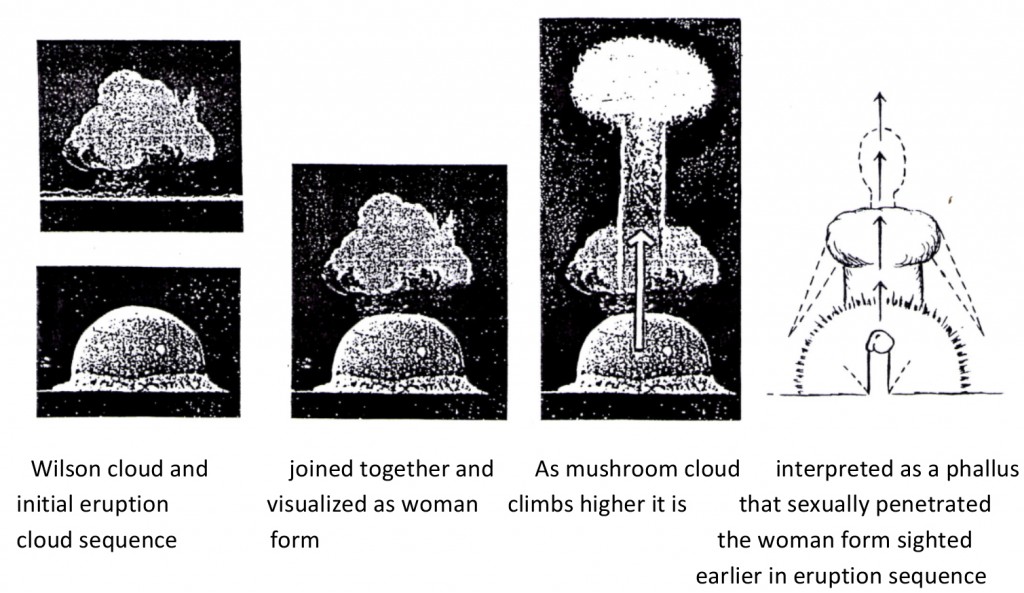 As stated the Sumerian sea god Enki was described as having impregnated goddesses with his water (or semen). This description makes contextual sense when we realise the ‘phallus’ (end stage mushroom cloud sight ) he uses to impregnate them with rose up from the ocean (impact site) and that the woman form he seemingly impregnated also appeared on the ocean surface (the initial eruption stage woman-like form). That water fallout from the impact poured from the sky after having viewed that imagined heavenly sex act reinforced to the Sumerians the idea that semen was connected with water for they saw the two elements as intrinsically connected. So not only did they believe that Father God (the phallus interpreted mushroom cloud)had fertilised the land with the fallout of his ‘semen’(water)but that he also sexually impregnated the ‘mother goddess’ form with his semen (water)in the sequence of the eruption spectacle. And so these dual sexual fertility themes became a core religious notion setting the basis of human sexual fertility themes aligned with agriculture fertility that is found in many primitive, pagan cultures.

Turning to other myth The Hindu Trinity consists of Brahma, Vishnu and Shiva. We are told that   creation begins with Vishnu floating on his ocean resting on his snake and that a lotus sprouts from his naval which is Brahma. In another instance when these Creator gods Vishnu and Brahma argue about who is greatest, Shiva, in the form of a giant fiery lingam (phallus) appears. So if we piece these elements together we have an ocean, a snake and a fiery phallus mentioned. As I have outlined other creation mythologies contain similar ocean and snake, serpent elements. The ocean is the asteroid impact site. The snake is the snake-like smoke trail of the incoming asteroid reaching down to the ocean impact site. The fiery lingam of Shiva is I believe based on the sight of the phallus shaped mushroom cloud, with its blazing fireball within, rising up from the ocean impact and like the Sumerians the Indians also interpreted that sight as a phallus(Lingam).

Pertinently Shiva was also equated with the God Rudra who was known as ‘the god of the roaring storm’. As outlined the Sumerian God Iskur whose name had the meaning of ‘Mighty Phallus’ was also a god of storms and as reiterated cyclonic weather and violent storms would most certainly be generated by the impact of a large asteroid. As mentioned the trident was also a symbol of Shiva. As I have outlined the trident shape is taken from the top half of the rock art figure form which represents a bare line schematic interpretation of the mushroom cloud eruption spectacle.

In one Egyptian creation myth the sun god Atum-Ra is described as ‘a phallus rising from the ocean masturbating creation into existence’. Once again, like the fiery lingam (phallus) of Indian creator god Shiva, such curious fiery phallus aligned description has baffled mythologists. When we interpret the supposed ‘sun-god’ Atum-Ra as instead a description of the sun-like blazing fireball within a phallus shaped mushroom cloud erupting from the ocean impact this creation tale is then thrown into understandable context and that like the Sumerians the fallout of water from the asteroid ocean impact was mis-imagined by the Egyptians as ejaculated semen fertilising creation from the phallus-like mushroom cloud.

In the Semite, Canaanite creation tale the chief god El impregnates two women near the sea foreshore. I believe once again we have yet another creation tale associated with the ocean and that the act of copulation in this tale I believe derives from the sight of the phallus-like mushroom cloud that had seemingly penetrated the earlier woman-like form in the ocean eruption spectacle.

Furthermore the mythic wife of El is Athirat (also called Asherah) and she is called ‘she who treads on the sea’. As reiterated a woman form was imagined to have been seen in the early stages of the eruption spectacle and because her woman-like eruption form appeared on the ocean it was imagined in hindsight by the ancients that such a wondrous woman sighted on top of the ocean must therefore have had the capacity to ‘walk on water’ and so the myth evolved.

In Greek mythology the phallus of Father god Uranus is cut off and thrown into the sea where upon the Goddess Aphrodite rises. Her name having the etymology of ‘sea foam’ which makes contextual and corroborative sense, her woman-like body being sighted as part of the eruption spectacle from the ocean impact. I believe a case of inversion has taken place in this particular myth. That in the retelling of this myth they have changed the eruption sequence around. As I have outlined a woman-like mother goddess form would have been sighted first in the earlier sequence of eruption (the Wilson cloud and the initial emerging blast cloud form) then next in sequence the phallus shaped mushroom cloud would have then risen into the sky. The Greeks swapped the sequence around and had the phallus of Uranus mentioned first and then the rise of mother goddess Aphrodite from the phallus of Uranus. As I have reiterated one must remember and consider that such myths have been handed down hundreds if not thousands of years in some cases and that over such long periods of time context has understandably lapsed and become corrupted in some of those myths.